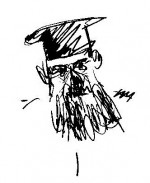 The priests here in Greece fascinate me, they
have style and everyone pays them respect.
They also seem to lead a normal life; one of
the priests here is married and has nine children.

When I was a young boy I always wanted
to be a priest. It never happened of course
and I already revolted in school when we
had to say a prayer in class in the morning.

Maybe it would have been a different thing
though, if I’d grown up here in Greece
instead of in Sweden.

Maybe then I would have been
a bead counter
instead of
a bean counter.