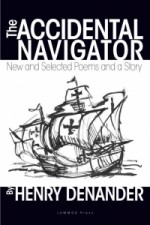 From Sweden & rest of Europe it may be easier and cheaper on postage to order from Amazon, click here.

Or email me to order a signed copy.


130 pages of new and old poetry in a perfect bound book.

Gerald Locklin says on the back cover of the book:

Reading through this large collection of Henry Denander’s poems I realize that he has taken his place in my pantheon of favorite contemporary American poets, alongside such as Edward Field, Charles Bukowski, Ron Koertge, Edward Field, and Billy Collins . . . and, astonishingly, he isn’t even American—he’s Swedish.  But he has somehow mastered our conversational idiom, our easy humor, and our perennial subjects:  childhood, children, friends, a second home (Greece), reading, eating, drinking, jazz, the simple pleasures, the inevitable battles with illness and aging. No one speaks in a more relaxed style.  He isn’t “just” a poet either:  he’s a prized illustrator and watercolorist, an accomplished prose storyteller, a perceptive collector and publisher.  And he takes it all in stride, as modest and unaffected as his congenial stanzas.  I loved reading these poems when they first appeared in periodicals.  I have returned to them with profound nostalgia.   I’m sure there are many more to come, but these alone would constitute a life’s achievement.  These are quite simply great poems.  Additionally, he has been, from the start, a loyal friend . . . and I have never even met him.

Here’s what people say about the author:

Dave Newman
Henry Denander is a genius of the narrative poem. He takes fascinating stories and compresses them into a brilliant poetry filled with real-world details and ironic insights. Denander's gift is one of turning everyday living into art and his places-- Sweden and Greece and America and the musicians and writers and workers who live there-- are endlessly interesting. Henry writes lines that read like stories and poems that read like novels. I've read everything he's written and loved it all.

Mark Terrill
Henry Denander certainly knows how to write poetry, and thanks to his own unique sense of style and at times self-effacing humor, his work stands totally on its own. And considering that English is not even his mother tongue, this is no small feat indeed.… In Denander's tightly torqued takes of the quotidian, which have more to do with tax accounting, family life, jazz music and the occasional trip to Greece than Bukowski's predictable world of booze, broads and the racetrack, I was actually reminded more of Richard Brautigan than Bukowski… we see the day-to-day life of a Swedish "bean counter" through the eyes of a sensitive and humorous observer, whose understated style makes these compact vignettes all the more endearing….Henry Denander is one of the most unpretentious and straight-shooting poets out there these days. His off-hand understatement, subtle irony and humorous self-depreciation all combine to make him one of the most endearing as well… a gentle observer with a keen eye and a better grasp of the easy grace of the English language than many native speakers.

Glenn Cooper
Poetry as it should be taught in the schools.
If educators the world over want to get kids interested in (or at least not hating) poetry, they could do far worse than use Henry Denander's poems in the classroom. Funny, wise, insightful, always there is something to admire in a poem by Denander. And they're easy to understand. You don't have to think about what it means. It's right in front of you.
Poems for the 21st century.